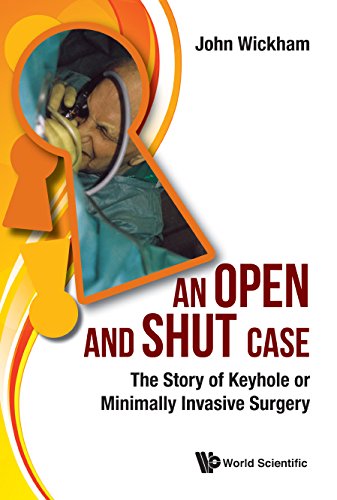 In 2016 the Professor of Medical History at Imperial College London asked if I would write an account of the many changes that have occurred in the field of interventional medicine or surgery in such a short time. These changes extend over a forty-year period when I was actually in surgical practice and which in 1968 I originally named ‘minimally invasive surgery’ or keyhole surgery. This short article finally evolved into a book, published in April 2017, entitled “An Open and Shut Case, The Story of Keyhole or Minimal Invasive Surgery”.

The first third of the book relates to my undergraduate training at St Bartholomew’s Hospital, London, and gradually progresses through the various grades of postgraduate training to my ultimate appointment as the first Consultant Urologist on the staff at Barts in 1968.

No definite department existed at this time as my predecessor, Alec Badenoch, was initially appointed to the general surgical staff, where he practiced purely in urology. When he retired it was left to me to develop an entirely new department, an event that was not always appreciated by some of my fellow consultants who felt that specialist departments were unnecessary.

In the same year I was also appointed to three sessions at the St Peter’s Postgraduate Hospital in Covent Garden, part of the University of London. The Institute of Urology was engaged in postgraduate teaching of the latest techniques.

It was here that things changed radically with the development of many operative procedures conducted completely by endoscopic control and other specialist instruments, all without the need for open surgical attack and described in part two of my book. This change rapidly took over my professional life and resulted in my introduction to a number of new procedures particularly related to renal stone disease.

In 1986 I was asked to head up a new academic unit at the Institute of Urology with a view to promoting more postgraduate teaching for urologists in the UK, but more especially for urologists from abroad. I was offered a new chair to head up this unit but in those days full professors could not indulge in private practice, which was difficult as a proportion of my income then derived from private practice. This problem was ultimately solved by appointing me Director of the Academic Unit without the title of professor.

At the same time the first extra corporeal shockwave instrument had been developed in Munich, Germany, designed for breaking up and removing stone fragments from kidneys affected with this disease and without the need for any operation, either open or endoscope. Obviously St Peter’s would need one of these instruments.

I visited the Department of Health on two occasions to present a case for getting one of these machines, but both applications were turned down flat. At the same time I had occasion to speak to administrators of the Kuwait Health Service in London. They sent an evaluation unit to Munich to view the machine, realised its potential in renal stone surgery and offered to buy a machine and install it in London if I would administer it.

This was obviously impossible with all my other commitments and the day came when I had to decide what to do. The academic unit of the Institute held out great possibilities for the advancement and treatment of urological diseases, but to get a lithotripter at Barts was obviously impossible in view of its potential closure and its endoscopic development was very slow.

I decided that I had to resign from Barts and offer to run a complete Lithotripter Stone Unit in London, on condition that a proportion of NHS patients would be treated and that Registrars from St Peter’s would able to pass through the Unit, which was to be an ideal focus for the treatment of stone disease. The day came when I had to make up my mind to resign from the Department of Urology at Barts and to concentrate my efforts on the administration of this London Stone Unit, which would be able to cope with any form of renal stone disease.

The administration at Barts was very good, and suggested I took a year’s leave of absence to see if this was the correct decision. It was, and it led to the development of a completely new stone unit in the centre of London. At this time the Germans already had seven machines working and had cleared all the waiting lists in the country for persons with stone disease, which was quite amazing. Soon over sixty lithotripters were similarly in use in the United States.

Arising from all the change I went on to organise the first meeting of the Society of Minimal Invasive Technology (SMIT) at the Royal Institution in 1989 and I was elected its first Chairman. SMIT continues to this day.

In 1991 it was decided by the Government to close all the minor postgraduate hospitals and institutes in London. St Peter’s had 200 beds and was down-rated to 30 beds in one ward in the Middlesex Hospital. At the same time the Institute of Urology was also closed.

I was due to retire completely in 1992, but I still had two problems. Firstly, we had no office or facility to continue running SMIT or its Journal and secondly, a major research project to develop a totally autonomous robot for prostatic surgery was suspended.

It was here that Lord Ian McColl, professor of Surgery at Guy’s and a colleague of many years, offered us a lifeline. He provided us with an office in his department at Guy’s, both for the development of the Journal and the organisation of future meetings of SMIT. In addition, our liaison with Professor Brian Davies at the Department of Robotics at Imperial College London, to complete the Probot robotics project, was about to be continued.

In 1992, in conjunction with Imperial College London and my then registrar Senthill Nathan, we managed to finally utilise this new machine that could operate totally autonomously and which, once set up, required no direct human surgical intervention. Using the Probot we managed to perform a prostatectomy on about 20 patients without difficulty.

I finally retired from the NHS in 1992 and closed my private practice in 1998. On account of the various activities that are described in this book, I spent much time travelling in the UK and worldwide to spread the gospel of minimal invasive surgery.

I am absolutely delighted that Barts has survived and will continue to flourish when all the related dust has settled and that this book explains the mechanisms of this vast switch from open surgery operations to the far less traumatic methods becoming available today.

back to news
➔