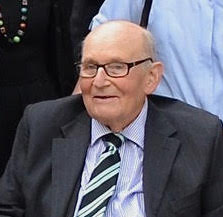 We are sad to report the death on 8th February of former Guild chairman Professor Chris Hudson. He leaves a widow, Caryl, a former Barts nurse, and a daughter, Jane, a physiotherapist , as well as two sons – Grahame, an associate Professor in Design Management and Neil, who was elected as MP for Penrith in December 2019.

Chris, who was Chairman of the Guild between 2007 and 2012, was the first man to chair what was formerly known as the ‘Women’s Guild’.

Trained as a doctor at Barts, Chris qualified in 1955 and throughout his distinguished international career maintained his close links with his alma mater. In 1970 he was appointed as a Senior Lecturer (Consultant) at Barts. He was later appointed as a Professor in Australia for several years, before returning  to Barts and Homerton as a Consultant, where he was awarded a personal chair in Obstetrics and Gynaecology in 1993  becoming Professor Emeritus upon his retirement.

Along with his many medical and scientific achievements he remained actively involved with successive generations of Barts students and alumni, in particular with both the women’s and men’s Boat Clubs. Later, he became President of the Barts and The London Alumni Association.

After stepping down as Chairman, Chris continued to take a lively interest in the Guild and as a member of the Management Committee was always ready with good advice and sage comments.

Remembering Chris’s contribution to the Guild, fellow Past Chairman Andrew Phillips said: “During his chairmanship he ensured the Guild made a real occasion of its Centenary (especially through the Concert which he backed enthusiastically), encouraged new Trustees who were to prove very active in the Guild, initiated a friendly footing with the Barts Charity and helped the Trust’s senior management to increasingly appreciate the Guild’s contribution. As ill-health took hold and his mobility lessened greatly I admired the grace he showed in adversity, the presence that he brought to us (and always well turned-out), despite physical strains, in his attendance at Guild occasions.”

A fuller appreciation will appear in a forthcoming edition of Barts Guild News.