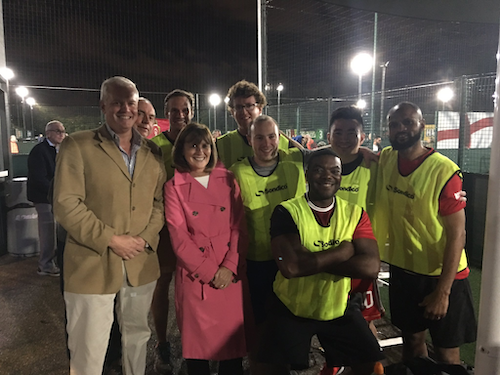 The Guild was recently delighted to award a grant to Two-Touch AFC, which enabled the football club to celebrate its 10-year anniversary.

Two Touch Athletic Football Club provides cardiac patients who have completed the cardiac rehabilitation programme, with a form of long-term exercise that’s both accessible and fun.

On Friday 27th September 2019, the club celebrated the landmark occasion with a football tournament at Goals in Chingford. Teams participating in the tournament consisted of three Two-Touch AFC teams (players with various heart conditions), clinicians, physios and other healthcare professionals who were all fighting for the trophy. In a testament to the fitness levels and skills that the players have now attained, one of the Two-Touch AFC teams managed to beat the Barts Health Physio team (the favourites to win) in the final match and won the trophy! This made for a euphoric and emotional awards ceremony, where players in each team were awarded with a medal, before the winning team (Two-Touch A) took charge of the trophy.

Alwen Williams, Chief Executive of Barts Health and Charles Knight, Managing Director of St Barts, also spoke of how inspiring they found the club and highlighted how unique Two-Touch AFC actually is. This was followed by food and drink and the cutting of the cake. More than 70 people attended the evening, as friends and family also turned up to support the players, even in the pouring rain!

Brian Coleman, one of those who established the club, commented ‘Everyone is very proud of themselves and how far they have come. They’ve remarked about how one day they were lying in a hospital bed thinking their life was passing them by and now here they are, playing football against clinicians and winning trophies and medals. They’ve also made great friendships, supporting each other when someone is struggling and regularly socialise outside of training sessions. I’m honoured to work with these patients, to see them happy and fulfilled and that’s the greatest reward setting up Two-Touch AFC has given me’.

Player Jeremy Golding, a former Barts patient, said: “Being born with a congenital heart defect has meant that although I love sport, my involvement has been somewhat limited. After corrective open heart surgery in 2018 in Barts Hospital, I thought my participation in sport would come to an end, but how wrong I was! I started rehab once a week, giving me the confidence and belief that I could still participate. I then attended a more demanding rehab session provided by Two-Touch AFC on a Monday, that started to introduce sports like badminton and football. I now play football regularly on the Wednesday night Two-Touch AFC session with other guys who have suffered a heart related issue.” 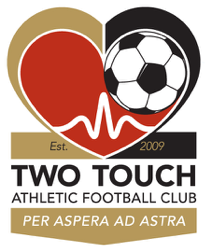 Two Touch Athletic Football Club was established in 2009 by Brian Coleman, senior Cardiac Rehabilitation Nurse Specialist at Barts Health and Colin Gilbert (Kelmscott Leisure Centre) Their aim was to provide cardiac patients who had completed the cardiac rehabilitation programme, a form of long-term exercise that was both accessible and fun. Brian felt that football would not only be an informal way of maintaining fitness but would provide patients of Barts Health an opportunity to meet others with the same conditions and exercise in the knowledge that there are medical professionals in the room.

Over the years, Brian and Colin have arranged several football matches with cardiac doctors, nurses and physiotherapists versus their patients, which have been enjoyed by all and was covered by Sky Sports News in 2014. Keen to challenge his patients and improve their confidence, Brian arranged to take a group of patients and climb the O2 arena to raise money for the cardiac outpatients department at Whipps Cross on two occasions. Several of those who play in a Wednesday session are now also participating in challenge games on a Sunday (in Chingford) where they travelled to Leeds in 2018 for a challenge game and had their first club holiday, to Italy, in July of this year.

You can find out more about the club here on Twitter.