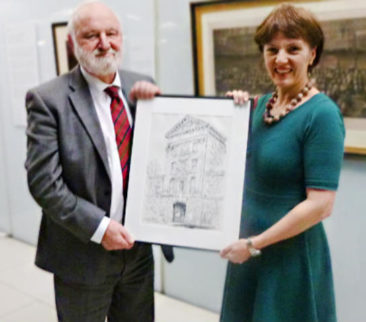 One month ago today, Former Secretary of State for Health Frank Dobson passed away.  He had a special link with Barts Hospital, as well as with the Guild itself. He is pictured here, for example, receiving a gift from former Guild Honorary Secretary, Jenny Jeyarajah. Andrew Phillips, former Guild chairman, writes the following of him:

“Frank Dobson died on November 11th 2019, Remembrance Day. He had served as a Member of Parliament for nearly 40 years before 2015. The needs of London and its citizens had been central to his concerns.
He told Barts Guild’s Chairman at the 2015 Guild AGM that, as Secretary of State for Health, saving Barts Hospital from closure was one of the very best things he had done in his political life.

The 1990s had seen Barts’ existence under threat countered by great defence from the Save Barts Campaign in which the leadership skill of its chairman, Wendy Mead formerly Guild Vice-Chairman and Trustee, played an important part. Frank agreed with the Campaign and lived to see his decision wonderfully vindicated by the building of the new block for heart and cancer medical services at Barts and the further development of Barts as an internationally renowned hospital.

It was characteristic in 1998 that he should simply and modestly announce “Barts will be saved”: and with those words Frank Dobson took his honoured place in Barts Hospital’s history.”