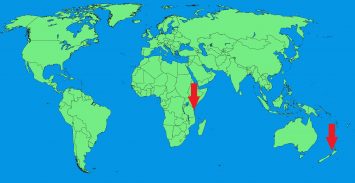 In 2017, Barts Guild established the ‘Barts Guild Elective Grant’ to support medical students from Barts and The London School of Medicine and Dentistry. These grants are intended to support a medical student, who would be unable to financially support it by other means, undertake a ‘medical elective’. An elective is time allocated in the medical degree for students to explore an area of interest, commonly an experience in a healthcare system abroad. These grants were made possible by the generous donation of the Wainwright family, in memory of Dr Laurence Cartledge. Dr Cartledge was house-surgeon in the Ophthalmology department at Barts until his untimely death in 1956, aged 43. The Wainwrights report how Dr Cartledge himself would not have been able to study medicine if it was not for similar grants and support.

The 2019 grants were made to Amy Arnold and Rebecca John, to support placements in Tanzania and New Zealand, respectively. Summaries of their experiences are provided below.

I completed my medical elective in Zanzibar, Tanzania. Alongside two other medical students, I spent 6 weeks living in Stone Town, which is the largest city and historic capital of Zanzibar. Zanzibar is a fascinating island and is a product of a mixture of cultural influences from the Middle East, Portugal and mainland Africa. It has a population of around 1.5 million, 99% of whom are Muslim. Despite the luxury impression which exudes from the white sandy beaches and rapidly expanding hotel resort industry, the average annual income of local people is US$250. This level of poverty was very apparent to me during my hospital placement.

The hospital I worked in was the Mnazi Mmoja hospital, situated within Stone Town. The Mnazi Mmoja is the only government run hospital in Zanzibar and serves the entirety of the population, the majority of whom are unable to afford private healthcare services. My first impression of the hospital was therefore as could be expected; very overcrowded with waiting areas overflowing with patients, many of whom had travelled very long distances to be there. The hospital was much bigger than I had anticipated and was divided into multiple departments, medical and surgical wards and outpatient clinic buildings.

I chose to experience the running of the paediatric department as I have particular interests in paediatrics, fertility and family health medicine. I was welcomed into the paediatric medical team on my first day and was shown around the wards, the neonatal department and the clinic rooms by one of the local doctors. Every day began with a 7:30am meeting to discuss new patient admissions, followed by a 3-hour long ward round to visit all the inpatients. Daily outpatient clinics were also held in the paediatric department with a different specialty focussed on each day, including a neurological clinic, sickle cell clinic and a malnourishment clinic. I was fortunate to be welcomed into all aspects of the paediatric department and was really grateful to provide my input and examine patients with the medical team. I learnt a lot by witnessing rare conditions that are much less common or would have been treated at a much earlier age in specialist hospitals in the UK. For example, children living with neurological conditions due to problems during childbirth were prevalent, as well as some with congenital heart conditions which would have been operated on at an early age in the UK.

On public holidays and at weekends we made the most of living on such a beautiful, culturally fascinating island. We enjoyed exploring the UNESCO World Heritage Site of Stone Town, visiting smaller villages across the island, as well as socialising with the local people. Exercising is an important part of the Zanzibari culture. Often, we joined the daily crowds of locals assembling at the beach to do running circuits, dances and a variety of fitness routines. The local people were extremely friendly and welcoming. For me, they were definitely a highlight of my experience in Zanzibar.

I am extremely grateful to the Barts Guild for offering me the Medical Elective Grant. I feel very fortunate to have had this 6-week experience in Zanzibar which wouldn’t have been possible without this support. The medical placement taught me a huge deal about the challenges faced by a public run hospital in a third-world country. It has also, without a doubt, inspired me to carry out further projects in places lacking in resources and in need of medical support. I will always remember the experiences I gained from this elective throughout my future medical career.

On Friday 19th April, my dearest friend, a fellow final year medical student, and I began the long journey to New Zealand. We flew from Heathrow, had a layover in Guangzhou, China and finally arrived in Auckland, New Zealand after 30 hours.

I have a keen interest in sexual health and women’s health and so I decided working with the New Zealand Prostitutes’ Collective (NZPC) would be the ideal place for my elective. This was also an opportunity to work with a diverse group of people, spanning a range of gender identities, ethnicities, ages and backgrounds. The NZPC is a non-governmental organisation that advocates for sex workers rights and provides services such as sexual health clinics, legal advice and advice on welfare/benefits etc. It is a peer-based service i.e. all the staff are current or former sex workers. The NZPC formed in 1987 and had been advocating for the decriminalisation of sex work since 1989. In 2003, they were successful. The government decriminalised sex work in NZ, increasing workers’ rights, improving wellbeing and reducing crimes/violence against sex workers. The NZPC has also been contracted by the government since 1988 to provide sexual health services to sex workers.

The elective was structured over 6 weeks, spending 2 weeks each in the NZPC offices in Auckland, Christchurch and Wellington. In all 3 offices, we took part in volunteer duties, such as making health promotion posters and making ‘street packs’; packs containing various safe sex supplies. Outreach work involved visiting parts of the cities that sex workers were based, providing them with street packs and talking to them about any concerns. Often, information was shared regarding difficult or violent clients, ensuring other workers could avoid them. Additionally, doctor or nurse-led sexual health clinics were run on a weekly basis. We were able to sit in on these clinics (patient permitting) and on occasions assist in the medical duties. Throughout the day, sex workers were welcome to come in to sit and chat, as well as have some food or a cup of tea.

We began our time with the NZPC in the Auckland office. The office is in the city centre, just off Karangahape Road (locally known as K’ road); a bright, vibrant area filled with bars, cafes and thrift shops. The Auckland office served the most street based sex workers, compared to other offices in the country, and as a result made more than 100 street packs ready for outreach during our time there.

Outside of work, we took part in some tourist activities, including visiting Hobbiton (permanent movie set used in The Lord of the Rings and The Hobbit), Waitomo glow worm caves, and Waiheke Island. Waiheke Island is just off the coast from Auckland and is home to dozens of vineyards; a truly idyllic spot, home to native NZ wildlife and good wine.

We moved onto Christchurch after 2 weeks. Christchurch had a distinctively different feel; a much smaller city, still recovering from the large earthquake that occurred in 2011. We were shocked to see parts of the city still in ruin, including prominent buildings such as the cathedral. Despite the outward appearance of the city, the people were very welcoming and friendly. One local took us for a day out around the local tourist spots and told us some of the Maori history of the area. We also enjoyed walking in the bush, going to the beach at New Brighton and going on nights out in the centre (during which we befriended the loveliest bouncer I’ve had the pleasure of coming across).

The Christchurch office served a far smaller population but still took part in outreach services and worked closely with other organisations to improve public health and wellbeing. Once a week we went on outreach with the Salvation Army. Sat in a camper van on Manchester Road (the main road from which street workers operated), we made teas/coffees and food, and gave out safe sex supplies. Sadly, we witnessed several sex workers being subjected to harassment, demonstrating the stigma and violence imposed on sex workers. Despite this, the sex workers, NZPC staff and Salvation Army staff remained resolute, banding together to protect and help each other. To further our understanding of sex work, we were also able to visit a brothel to meet some of the workers and speak to the brothel operator. Additionally, we met Gillian Abel, a top academic whose work studies the impact of decriminalisation of sex work on sex workers rights and wellbeing.

Lastly, we moved onto Wellington. Wellington is the capital of NZ and is home to the head office of the NZPC. Wellington is a student city filled with people from all walks of life. The heart of the city is Cuba Street; home to restaurants, bars and shops, as well as the rainbow crossing and ‘Carmen’ the green light signal on traffic lights. ‘Carmen’ represents Carmen Rupe, a trans woman and LGBT activist who ran for mayor of Wellington in 1977. We were able to work closely with the head of the NZPC, Dame Catherine Healy. She is a prominent figure within promotion of sex workers rights and health; she has advised on reform/legislation regarding sex work, co-edited books on sex work and successfully debated the decriminalisation of sex work at the Oxford Union. We were able to gain insight into the changes that have occurred over the past 3 decades and the work that is still ongoing today.

The NZPC were wonderful hosts who included us in every aspect of life within the organisation. Staff made every effort to welcome us; we went to a dinner party in Christchurch, a kiwi BBQ in Wellington and on our last day the staff gave us a farewell tea party with cake and card included. Meeting the workers and talking to them about their lives was a privilege and provided invaluable insight into their experiences and the challenges they face. I have no doubt that my time with the NZPC will have a lasting and positive impact on my future practice. Working with the NZPC also enabled myself and my colleague to produce a booklet that aids students and healthcare professionals in communicating with sex workers, to overcome barriers and provide better healthcare.

Without the bursary provided by the Barts Guild I could not have gone on this elective and thus taken advantage of such a wonderful opportunity. Many thanks to the Barts Guild and the NZPC for providing me with such an awe inspiring, enriching experience. It is one I certainly won’t forget.

If you’re a medical student at Barts and The London and interested in applying for a Barts Guild Grant, please complete the application form available on the medical school’s website, by clicking here.